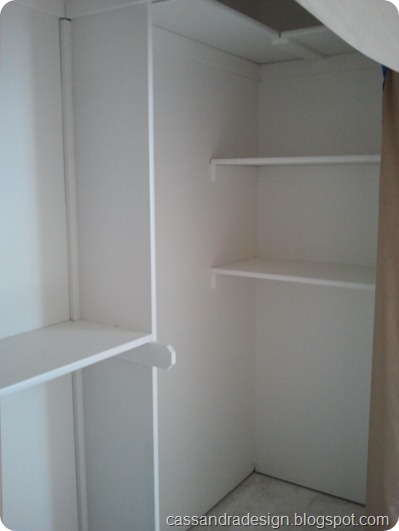 The closets were built to be big. I didn’t want the standard small closets. We have nice size closets upstairs and I wanted to replicate that downstairs. I enjoy having things tucked away in the closet so that good design can prevail. 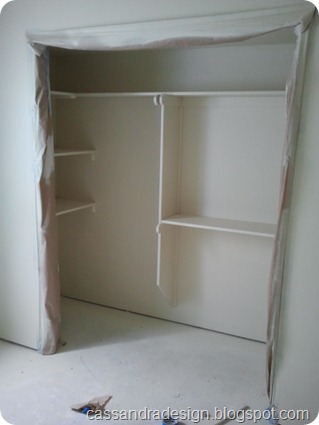 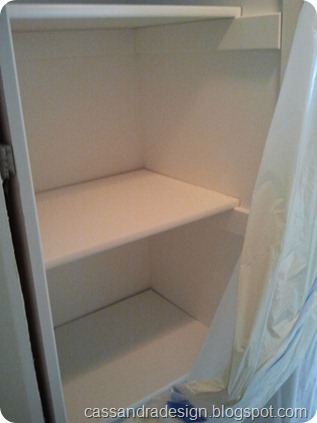 Each closet was a little different size due to the duct work and the layout. These pictures were taken when the closets were being primed and painted. We even used a little space from the large bathroom to put in a closet in the hallway (pic on right). We have always needed a space for board games, toys or just towels for downstairs. There is tons of space for towels in the vanity but, it is always nice to have a linen closet upstairs and downstairs.  We actually measured our board games to make the shelves for the game closet. We measured our game sizes, figured out how many games would fit on a shelf and then adjusted the shelves to allow for five large board games on each shelf so, on some shelves, it may fit more games! Yeah…finally a place to put the games…and then we moved! Ha Ha…hopefully we can eventually move back there and enjoy this beautiful space we created! (p.s. we are renting the house while we are in Kansas going to school)

Posted by Cassy at 7:54 AM 2 comments: Links to this post

We worked like mad on our basement before we moved (like the kids went to bed and that’s when we went  to work on our second job, the basement, until the wee hours of the morning) and actually got everything done but a few last projects. We have been very blessed to have wonderful family and friends that have come and helped us finish those last items. But, let me show you where we started (keep in mind that all of this was done in a four week timeline..…like painting two days before our moving trucks showed up….I know…crazy right?!`) 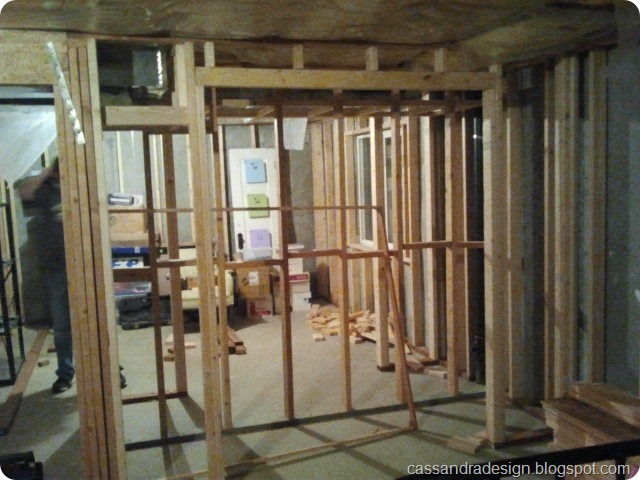 We pretty much started with a blank slate. We rough framed in the outside walls, the closets and the doorways. We made nice big closets because we had the space. Who doesn’t want more closet space? Right! 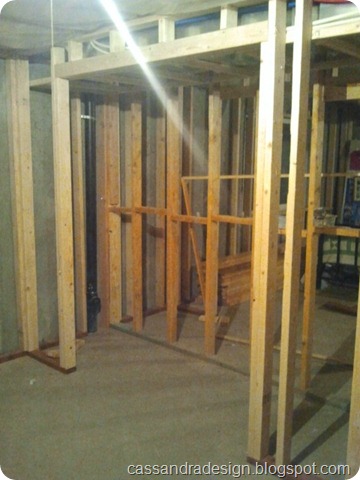 The closets of the bedrooms hid the duct work that ran down the hallway. Love that! 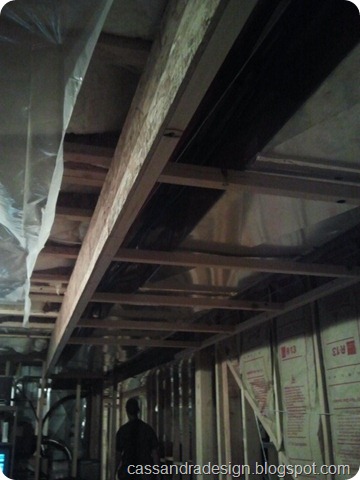 We had to build in the sophets (sp?) to surround the duct work, installed door frames, did the plumbing and the electrical throughout! The only thing we didn’t do was the drywall. Why….because we aren’t crazy!! That is some hard work!! It is a four step process with the mudding and taping and definitely should be left up to the professionals. They did a great job! 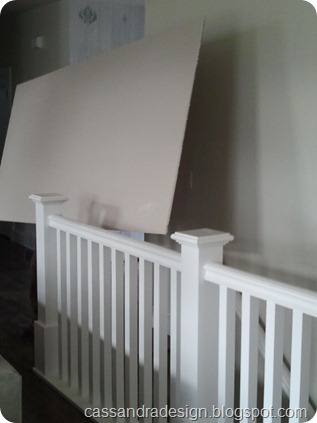 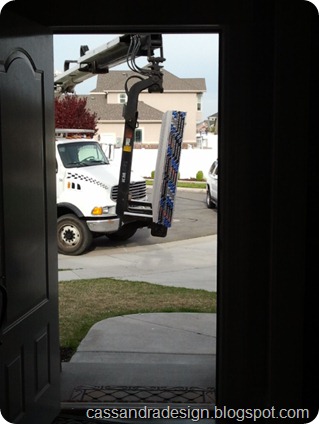 The sheet rock is brought to the house on a huge truck, who then uses a crane to bring it to the house. The crane holds a lot of sheets of dry wall at one time. They had to crane over lots of stacks to get the quantity of sheet rock needed for our basement. They pretty much used the crane to bring it almost to the front door and then the guys had to hand carry every piece of dry wall down my stairs. These guys were really good at what they did. They would spot each other on the first sheet. Then they would all follow each other doing the exact same thing, over and over with each individual sheet. They had to turn the corner from the front entryway, then lift the front edge up and over the bannister then proceed to walk every piece down the stairs and dipping at the bottom of the stairs to fit under the ceiling. I really mean it when I say,  CRAZY hard work. These guys were huffing and puffing (and they were buff guys) to get the 15 footer dry wall sheets under that ceiling at the bottom of the stairs. These are heavy sheets and they had to hand carry every piece of the drywall around the corner, down the stairs and then get it into each room. 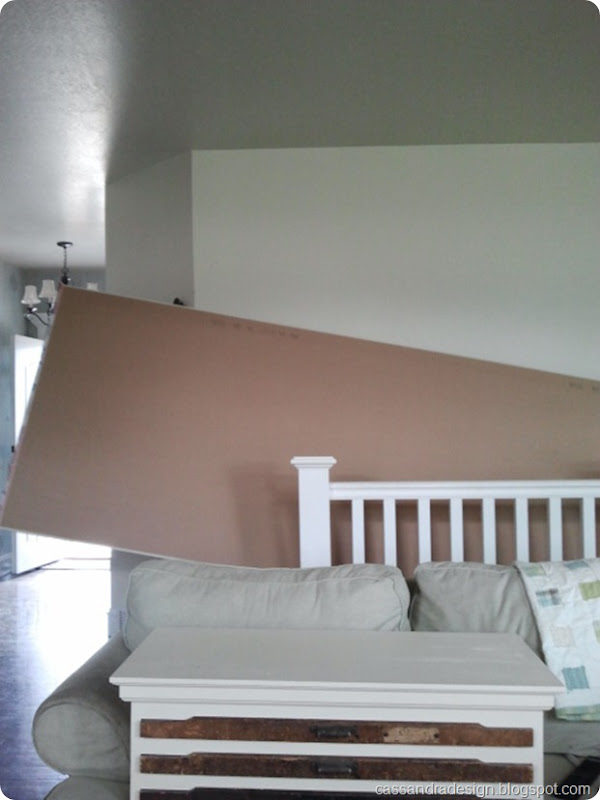 Yes, there is a guy carrying that huge sheet of drywall. It’s so big, you can’t even see him. The huge 15 footers were so big that I couldn’t get them in one frame. I asked if they were heavy and the guys said they weren’t too bad but, at the bottom of the stairs you could hear that it was hard work dipping down to get underneath the ceiling. (I know you can see my printer’s drawer cabinet sitting on the couch and that’s because we had just moved my studio so we could get the drywall done but, what you can’t see is the library card catalog sitting just off to the left. The house was a little disheveled while we were finishing the basement. Okay, A LOT!!) 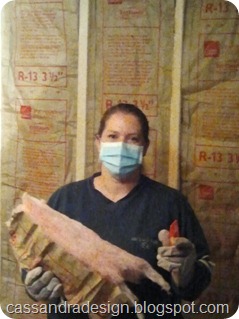 This is one of those pictures that you look at and immediately want a shower. I am actually very proud of this picture, though because I was the one to insulate the entire basement!! Whoot Whoot!! My husband had planned to help me that night but, we had dry wall-ers coming at 7 am and if we didn’t get it insulated AND the electrical done in the last bedroom, we would have to put it off another day and time was something we didn’t have a lot of. I don’t know electrical so, we divided and conquered. I insulated while he pulled wires. We finished at 3 am that morning and I only finished about five minutes before my husband did (we did a lot of canned lights in the basement). This picture was taken at 3 am after I finished the entire 1,700 square foot basement……which if you know how that is calculated…..that’s a lot of insulation. It’s a itchy, sweaty, hot manly glove wearing, strip your clothes off and shower immediately after you are done kind of job…..and I am really proud of doing it myself!

So, that is the beginning of what we did in the basement, more to come later!

Posted by Cassy at 7:56 AM 2 comments: Links to this post

I don’t know if any of you caught it but, I was featured over at West Furniture Revivals last week. Lauren featured my printer’s drawer cabinet that I built to go on top of my library card catalog. Go on over and take a look and tell her Cassandra Design sent ya!! There are other cool library card catalog ideas! 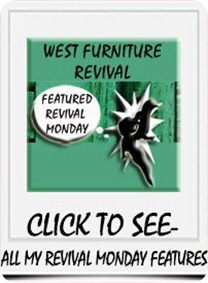 You can also check out the original post here on my blog. http://cassandradesign.blogspot.com/2011/12/printers-drawer-cabinet-is-finally-on.html

Have a great day!

I have missed blogging and sharing my fun projects. Moving has been quite the adventure! We have been here almost three weeks on Friday yet it seems like a lifetime ago. We hit the ground running! We haven’t stopped moving since the moment we arrived here. We have been un-packing, un-boxing, trying to decide where the furniture should go (the hardest part…..all the thinking and trying to work the furniture the best possible way). I started my job which requires training, full time hours until I am fully trained and able to go on my shifts. My husband started school and is already on his third test….I know, Right! Crazy schedule!

I have wanted to blog but, honestly have had the hardest time. I have always had lots of fun projects and things that have inspired me but, this house has so many challenges. I remember opening the car door and getting out into the humidity and thinking….oh my goodness, where have we moved? It was SO muggy. I guess it had recently rained which only added to the humidity. We had been driving for, I can’t even remember how many hours, when we finally pulled into the driveway of the house that we would be renting (sight un-seen, although the owners had done a video tour for me so I could try and figure out what furniture pieces to bring). The kids had been wrestles and we were all ready to get out of the car. I knew the house was going to be smaller ( about half of our last house’ size…but, we would be going to school so we knew we were going to downsize to cut costs) So, I prepared myself but, honestly in the exhaustion of the drive and the humidity, as the home owner (which, by the way, is so nice and wonderful) was showing us around, I could only think….oh my, 1980’s oak trim….everywhere. Where was all my beautiful white moldings? We came all this way and I felt like I had taken ten steps backward in design. (pitiful and self loathing…I know…but, I am being honest here and I am working on it) In the houses’ defense, it is really pretty well laid out and I feel like we use every space and there isn’t wasted space.

So, between everything we are busily doing, I am constantly staring at spaces, trying to figure out how everything is going to work. Documenting it as I go. I guess, this blog will be about how I make the most of the spaces I have now. We have the best property owners that are up for me painting and updating the house and I’ve already done a little painting (there were a few things that were absolute top on my list)

But, this is just to say, I am back…..a little design beaten down but, back and finally ready to change things and be inspired again because I am noticing things about this house everyday that would be really cool to do!!

So, I am back and ready to make some improvements (on myself and the house)!

Posted by Cassy at 4:17 PM No comments: Links to this post 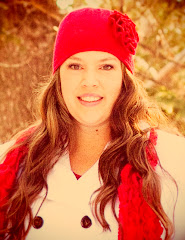 I am wife and mother to four beautiful children with one already waiting for us in heaven. I love to paint furniture, reupholster projects, design rooms, build benches, sew a little, cook a little, fix up the old or make something new out of it. I try to think outside the box.Some of my favorite projects turned out differently than planned. I enjoy creating and love it even more when my children help me with my projects. They are my best helpers.

You can Email me at:

Where are you visiting from?

You may think you don’t have talents, but that is a false assumption, for we all have talents and gifts, every one of us. The bounds of creativity extend far beyond the limits of a canvas or a sheet of paper and do not require a brush, a pen, or the keys of a piano. Creation means bringing into existence something that did not exist before—colorful gardens, harmonious homes, family memories, flowing laughter.
-Dieter F. Uchtdorf

Antique Door made into Message Center 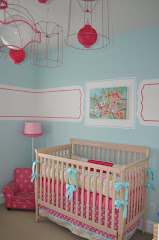 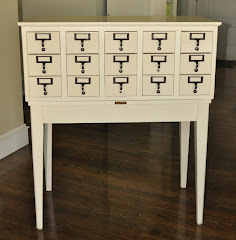 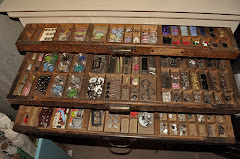 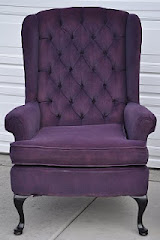 Candle Posts made from Stair Railings 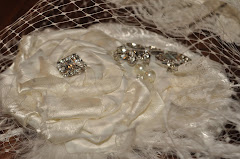 Bench made from Baby Crib 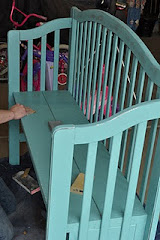 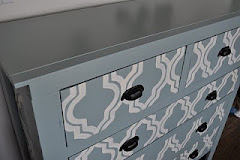 "As you take the normal opportunities of your daily life and create something of beauty and helpfulness, you improve not only the world around you but also the world within you."